I have a confession to make: I’m a zoner outer. The right genetic material and years of diligent practice have combined to give me the ability to completely detach myself from the world around me.

Parenthood has mercifully put some parameters around this – I have to stay somewhat alert when I’m the sole adult in the house. But often once the kiddies are in bed, my third set of eyelids slowly envelop my eyeballs, shielding them from harsh earthly reality while still allowing light to penetrate. The light is usually from my phone. The phone is usually displaying a pungent mix of Donald Trump, political editorials, Facebook, and blogs. Even, on bad nights, People magazine. It’s not pretty, and I’m kinda embarrassed to even write about it. But I don’t think I’m alone in this. Maybe you’d rather binge-watch Netflix than scan Vanity Fair for articles about the complicated dynamics of Jackie Kennedy’s relationship with her sister (yes. I have done this.), but you get the gist.

I’ve never been proud of my zoning ability. But what’s really hit home lately is that not only is zoning out a bit gross, it’s actually not very restorative. I usually stumble out of an internet stupor once the guilt or boredom gets too strong, and find myself with a Trump-induced mental hangover and the feeling that my brain has been binging on Cheetos. It’s easy to listen to cultural messages to “indulge myself,” especially after a long day with my kiddies, but that indulgence doesn’t seem to pay off. It doesn’t leave me feeling restored or ready for another day with the hobbits.

This realization really hit home a few weeks ago, as I backpacked with four girlfriends through a downpour in Banff. My very peppy friend started planning the trip months ago; Todd told me I should go because I was “getting soft in my old age.” The sad truth is that he was right. The thought of spending a precious kid-free weekend hauling all my essentials through the mountains just sounded…draining. And in one sense, it was draining. It rained most of the time, the bugs were terrible, my rain coat failed, our tent sat in a puddle of water, and I came home with a bad cold. But it ended up being one of the most restorative weekends I’ve had in recent memory. 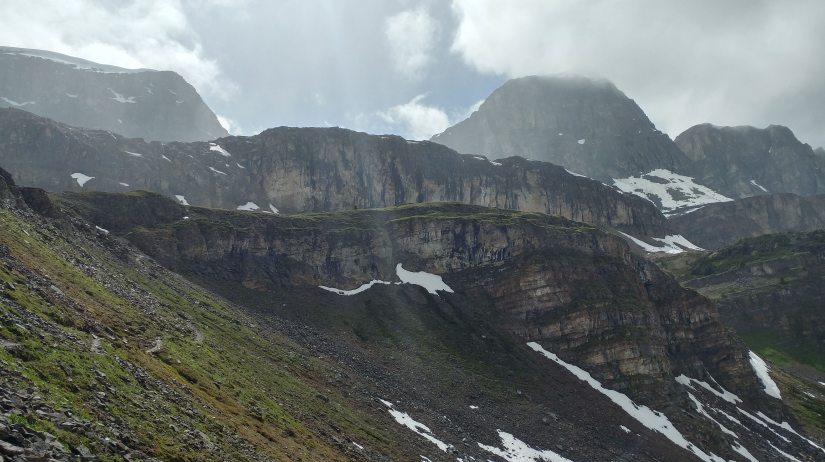 I had good conversations. I remembered a whole set of backpacking skills that have been sitting on a mental shelf since my kids were born. I felt resourceful and tough. And I felt God speaking to me through His creation. Even though I was physically tired and sick at the end of it, the feeling of mental and spiritual restoration is still with me three weeks later.

I wonder if there’s a greater truth here. That often, the things that truly restore us are the ones that take some effort. I think this truth has been buried in cultural messages of “you deserve a break,” and the endless entertainment options on our devices.  We’re designed to need rest, but so often, zoning out has taken the place of real rest. And zoning out takes no effort.

I wish I could run off to the mountains whenever I need restoration. At this stage of my life, that’s not possible. But it is possible to make small efforts to do things that restore me. Writing this blog, for example. Going for a run. Reading a good book instead of Facebook. Reading The Good Book. Praying, especially. Once I get over the initial effort, the reward of real rest is there.

I’ll probably always be a zoner outer by nature. But I hope that by focusing on restoration and the Restorer, the need to check out of life will fade.

I'm a 20-something Canuck who recently moved to Bangkok with my long-suffering husband. I'll be chronicling our (mis)adventures as we eat, drink, and discover the meaning of life in this land of gastronomic perfection. View all posts by Ruth

4 thoughts on “Zoning out vs. Restoration”